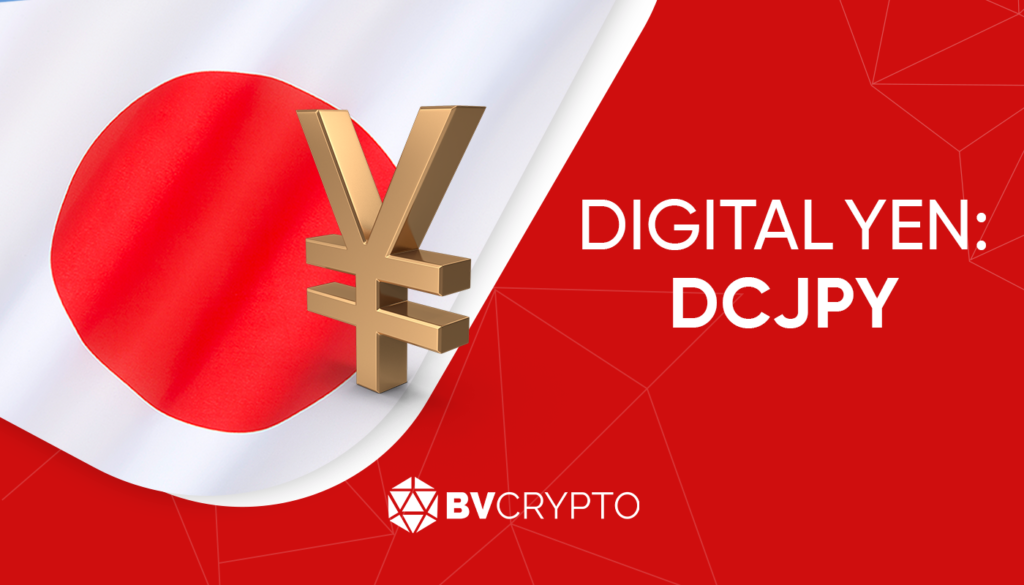 Today, at the point where cryptocurrency technology has arrived, the most common way for states to adapt to this technology is to develop a similar currency under their own control. We see that many countries have begun to develop CBDC (Central Bank Digital Currency) that has gained popularity thanks to China’s Digital Yuan project. On the other hand, Japan is perhaps the least interested in developing its own digital currency, despite being a developed country and a pioneer in technology. Still, the Bank of Japan’s statements expressing that it was not initially interested in the topic has evolved into some superficial works as its popularity has grown.

The Digital Currency Forum, made up of 74 firms, is a private-sector consortium for the Japanese CBDC (Digital Yen) project. This consortium aims to ensure that this superficial progress receives a more serious infrastructure and that more concrete outcomes emerge. The Tokyo Stock Exchange is part of a consortium that includes Japanese financial giants, insurance companies, maritime transport companies. Observers include Japan’s Ministry of Finance, Ministry of Internal Affairs and Communications, Ministry of Economy, Trade, and Industry, Central Bank, and FSA (regulatory agency). The model developed greatly resembles the private sector-oriented technique used in the United States. Instead of forming a working group directly, the FED preferred to collaborate with the private sector on the Digital Dollar project. Here, similarly, we see work carried out by the private sector while the government has observer status with various institutions.

The Consortium recently issued a whitepaper for the Digital Yen Project (hereinafter DCJPY). The primary goal of the project is to integrate digital currencies with efficiency-enhancing features such as low cost, speed, and transparency into business life. The most crucial stage is the first use of the project in maritime trade. Considering that most of the world’s trade is seaborne, the meaning of maritime trade means for an island country like Japan can easily be understood.

In our article, you will learn more about the operating system of DCJPY and what amenities it should offer.

Central stable coins (USDT-USDC etc.) are introduced by reserving an amount of fiat money in the bank equal to the number of stable coins released. Although these companies are not particularly transparent, this is how the system works, at least in theory. For example, 1 USD is reserved in the bank for 1 USDT. As a result, when users wish to withdraw money, that amount will not be unbacked. The model designed for DCJPY uses a similar method. When funds in users’ bank deposits are transferred to the DCJPY account, the bank automatically transfers the equivalent amount of DCJPY to the user’s wallet. In this model, banks are the minters and custodians of DCJPY. If the user wishes to convert his DCJPY back to yen, the bank will burn the DCJPY amount and remove it from circulation and transfer the corresponding amount to the user’s deposit account.

With this model, the consortium aims to meet both the transparency and monitoring requirements of the supervisory authorities. Although the infrastructure for a similar model has been created in the U.S., it has not yet been put into practice. The OCC, the banking regulator in the U.S., had allowed banks in the U.S. to engage in activities such as custody and minting of stable coins. In Japan, we can see more concretely that this model has been put into practice. The consortium also emphasizes that this model will help stabilize the Yen and make the Bank of Japan’s monetary policy more efficient. As users deposit more money in banks to use the DCJPY, it is expected to contribute positively to maintaining the Yen’s statistical data as it will increase deposits.

As mentioned at the beginning of the article, the aim of using DCJPY in business, especially in maritime trade, is one of the highest priorities. Therefore, the operation of DCJPY is technically divided into two areas. Basic bank-controlled wallet transactions, such as DCJPY transfers between users, minting and burning DCJPY, are processed in one of these, namely the Common Area. In other words, the transactions of users who only want to receive money and transfer are recorded in the region determined as the Common Area.

The Business Area, on the other hand, is a sphere administered by businesses and local authorities, rather than banks, for the buying and selling of goods and services. While this region is the project’s primary usage area, significant flexibility has been given to this area.

If a firm or local authority in the Business Area wishes, it can create its token. The value to be expressed by the tokens to be created is left to the initiative of the companies/local authorities. In other words, the token to be created can represent any service or the company’s entire value. The image below illustrates this system. 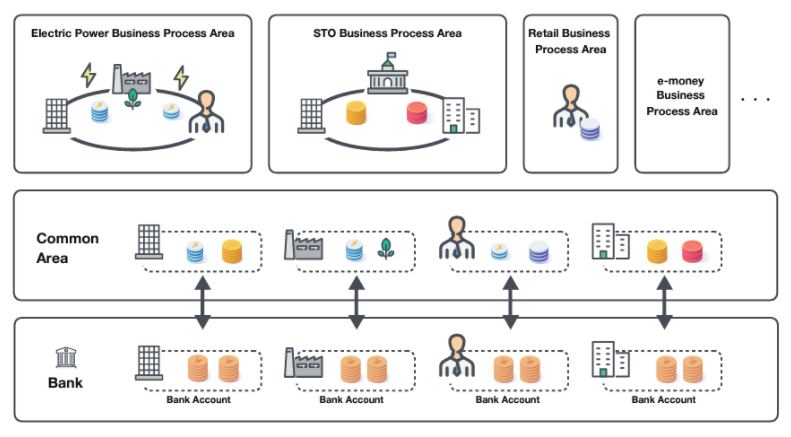 Starting in the middle part of the image, we can see that companies, factories, and individual users all have a DCJPY balance. Yen deposits guarantee all credit balances in the bank part at the bottom.

The middle area has different symbols since each company or factory produces a different product or provides a service. On the far left, for example, we observe a gold coin next to the company logo and a green leaf next to the factory. The factory generates electricity from renewable energy, and the company on the far left could also be a finance company. As a result, each organization’s product or service is unique. As a result, the monetary values they represent are different. Companies/local authorities can generate their own tokens to avoid any confusion in this context. This way, each product or service can show its monetary value clearly. The common currency for exchanging products and services in the top-ranking Business Area is DCJPY. Businesses/local authorities can buy and sell various types of products and services with each other through DCJPY, and individual users can be customers with the DCJPY they have in this area.

To increase the functionality of the infrastructure mentioned above, companies/local authorities are allowed to create their smart contracts and tokens. It is also stated that data from existing systems can be integrated into the DCJPY infrastructure via API and Oracle. It is aimed thus to establish a complex payment and trade infrastructure.

Compared to other developed countries, Japan is the latest to enter the CBDC area. However, as can be seen above, the infrastructure of a very complex system was created by adopting examples from other countries. While the consortium plans to begin pilot testing for large-scale transactions in January 2022, the system is expected to be operational by the end of 2022. We witness that countries are taking a wait-and-see approach to CBDC, given their competition with one another and potential risks. Given the dates, it is reasonable to conclude that Japan pursued a more aggressive policy. Considering that the system is primarily intended for domestic use and then for international integration, the DCJPY will likely attract a lot of interest.

In the end, when you look at the big picture, it is clear that each of the activities, such as the CBDC work of the countries, the project of VISA and Mastercard to create a platform where different CBDC infrastructures of the countries can work together, are, at any rate, actually making small or large contributions to the development of technology. Furthermore, implementing CBDC projects can reduce the problems that countries face in regulating cryptocurrencies. Although it is unknown which project will provide the ideal system, recent studies indicate that central banks are slowly accepting that the future financial system will be based on digital currencies.

Click here to open the original document of the Whitepaper.

The views and comments expressed here belong to BV Crypto. BV Crypto cannot be held responsible for any financial transactions based on this article. Because every investment and trading move involves risk, we advise you to do your own research when making such decisions.