Embedded Supervision: Is it a Ray of Hope for Stablecoin Regulation? 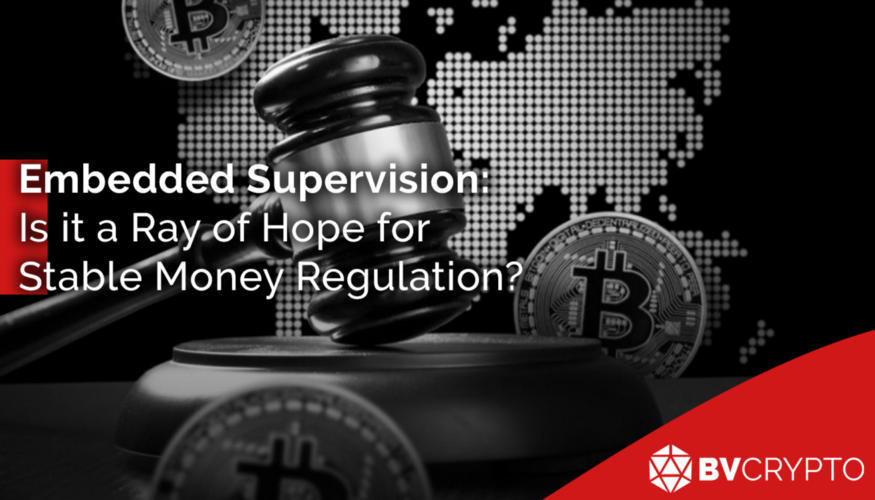 The Terra network’s crisis had a negative impact on large masses, whether they had invested in it or not. The occurrence of such large-scale dissatisfaction naturally brought with it a large number of complaints.

Established to ensure that complaints in the field of finance reach their authorities and to find solutions, public institutions and international independent organizations receive considerable attention during such periods. Due to the seriousness of the victimization, it is critical for these authorities to provide appropriate answers, as customer complaints demanding immediate solutions and penalties can be aggressive. However, there is very little difference between complaints that go unanswered and those that are answered over a long period of time. Because if the current problem is remedied at that time, the users who have suffered will be highly pleased. As a consequence, the fact that relevant organizations gain confidence in this manner boosts the chances of politicians receiving votes.

This crisis created by the Terra network has created many victims in terms of being a major crisis, just as described above. Regulators and politicians in practically every country where cryptocurrencies are a hot topic have begun to make statements about the regulation of stable currencies and/or the DeFi sector one after the other. Because the developments in the United States and the European Union, which are at the top of the economic size and development index, and the words of politicians in these countries are so important, it is critical to question whether the assertions are based on a serious study. For this reason, in this article, we will analyze international studies in the field of regulation, notably in the EU. To give a little hint, given the developed countries, except the US, it is difficult to say that the EU and international organizations have reached a noteworthy point of stable money and in the field of DeFi. The explanations given regarding the DeFi regulation, in particular, might be argued to be intended at comforting the victims.

Responsibility has been Delegated to the FSB

The request for international acceptance of the regulations to be made especially on cryptocurrency regulation is a joint request of the authorities. Otherwise, it is thought that country-based decisions will not affect the general sector, which will make it difficult to violate and follow the regulations. One of the German Central Bank authorities, Joachim Wuermeling, stated that “digital has no borders” in terms of DeFi, and he highlights very well that traditional methods cannot be used.

The G7 economy ministers and central bank governors gathered in Germany last May and assigned the FSB (Financial Stability Board) for supervising cryptocurrency and, in particular, the regulation of stable currencies. There is no question that a regulation published by the FSB will be widely recognized since it includes all G20 countries, the European Commission, and FSF members. Furthermore, the FSB has already published reports on concerns that stable currencies and the DeFi industry could jeopardize global stability, and it took on a similar regulatory duty in October 2021. So the process actually started before the G7 meeting.

So, what is the FSB’s currently highlighted work on regulation? Raphael Auer, who is also chairman of the innovation department of BIS, a Basel-based organization that sets international banking standards, focuses on an infrastructure system and associated principles called Embedded Supervision by FSB, an another Basel-based organization. Let’s look at the details and possible positive and negative returns of this study in partnership with BIS and FSB.

Before going into the system’s specifics, it’s important to keep in mind that this research has a fairly favorable outlook on the regulation issue. First of all, this research is based on the notion of ‘technological neutrality’ which is particularly important when governing a technological area. In other words, it depends on the principle that no technological field is more encouraged or prevented than another through regulations.

While regulators work to adapt cryptocurrencies to existing principles, this study argues that technologies like blockchain and DLT, which have become popular with cryptocurrencies, should be used, and that regulations can be carried out in accordance with the sector using these technologies. Since this study belongs to organizations such as FSB and BIS, the adoption of such an approach to cryptocurrencies is extremely positive.

With a code update to the distributed ledger system (DLT) used by DeFi platforms, this system, which means an automatic control mechanism embedded in the network, includes an automatic recording of each transaction in the network, categorization, and access to this information by the authorities at any time. In other words, it can be said that the system will act as a monitor.

This system, which will continuously monitor the network and platforms, ensures that the regulators be hand in glove with blockchain and DLT systems. In order for official organizations to connect directly with these infrastructures, the accuracy of the data obtained through this mechanism should be legally recognized. For this purpose, 3 main principles have been determined for the system.

Let’s take a look at what these principles mean…

The graph on the left depicts the change in the ratio of regulatory charges to total company costs from 2016 to 2018. Although the number of businesses with regulatory costs of 4% or more has decreased over the last two years, there is a stable aggregation between 1–4%.

When the graph on the right is examined, it is seen that the regulatory costs are not limited to companies, but that the FED and ECB also have similar problems. While the FED spends over 1.8 billion dollars per year on regulatory infrastructure, the ECB spends around 500 million dollars.

The following scheme is quite useful to summarize the operation of the system. 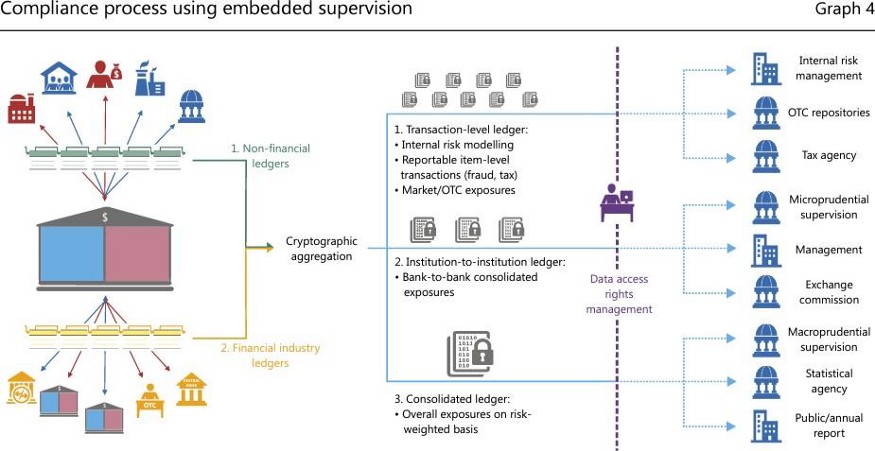 The most significant advantage of this system is that it allows official organizations to directly participate in a common DLT infrastructure. Even if a token is based on an asset that has already been used, it will be stuck in the bureaucratic procedures. When a token representing a house is sold, for example, the traditional process for making a formal change in the title deed must be followed. Cryptographic data transmissions are not accepted by official creditors due to a lack of legal and technical infrastructure. If it had, the title deed of the house could have been transferred to the new token holder as soon as the token was transferred. Embedded Supervision is uniquely qualified to address this issue. The fact that official organizations can participate directly in the network ensures that data in the network comes directly from official organizations, that is, the data’s source, and allows official organizations to identify data on the network. The ecosystem can be developed in this way by quickly overcoming bureaucratic procedures through tokenization.

Given that one of the necessary prerequisites is for the system to be legally settled to a clear infrastructure, the decentralization referred to by Embedded Supervision only refers to a technical decentralization. In other words, the number of miners/nodes in the network may be high, and they may be split across the region, ensuring that the network functions without being dependent on anyone. However, these miners/nodes must not be anonymous in order for there to be no legal gap. In such a case, decentralization is only provided technically, and it is not anonymous as it is in the cryptocurrency market. In this case, the possibility of the Embedded Supervision system regulating the DeFi platforms working on decentralize blockchains suchs as Ethereum decreases considerably. As a result, this report, which politicians or authorities point to when discussing DeFi legislation, isn’t actually a DeFi regulation. Since popular DeFi platforms are based on anonymity, how they will be encouraged to connect with Embedded Supervision is a big question mark.

While it appears that Embedded Supervision will have difficulties with anonymous blockchains due to the legal framework required, this does not appear to be the case with stable currencies. If necessary by law, stable currency issuers like Tether and Circle, which already operate centrally and strive to comply with all kinds of regulations, can be integrated to the Embedded Supervision system. In this case, the transactions of stable currencies such as USDT and USDC and the amount in their reserves can be viewed instantly by the regulator.

The official gazette of the European Union dated 24 February 2022 states that pilot studies have been carried out on Embedded Supervision.

In comparison to other regions, the EU may have a higher need for DeFi and stable money regulations. Supporting innovative sectors is vital for the EU, which has a well-developed, skilled workforce but also an elderly population. As fintech allows young and talented people to come to the EU, it is important to protect the present fintech sector while also bringing in new innovative areas like cryptocurrencies.

Again, going back to the issue of the cost of regulation, according to the graph above, the cost of regulation for companies managing an asset of USD 100 million or less is around 8%, while 1 billion and 10 billion USD, this rate is around 2%. Therefore, if regulations, which are a much more costly item for small businesses, can be reduced to low costs using systems like Embedded Supervision, significant support for the EU’s economic sustainability can be created.

As a result, there is not yet a suitable study for international regulation to work fully, especially in the field of DeFi. However, since Embedded Supervision is suitable for stable currencies, a regulation decision in this area can be made more quickly. The biggest achievement in this system is clearly the integration of official organizations into DLT-based networks. If this solution is adopted, substantial progress in the field of tokenization will be made.