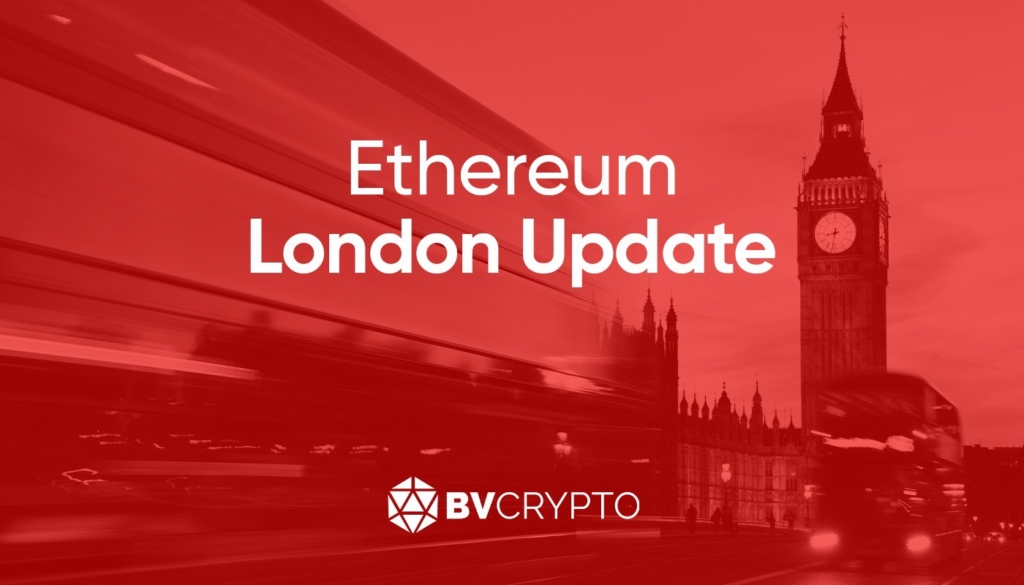 ETH price, roaming around 1,000 USD at the beginning of 2021, showed a continual rise until it reached the 4,000 USD level in mid-May. Parallel to this price rise; ETH cost has also seen an increase in the DeFi and NFT sectors as well as the Ethereum blockchain network, which hosts many ERC-20 tokens. Namely ‘Ethereum killers’, rival platforms that offer Ethereum-like infrastructure services in the market, but are claimed to have faster and more effective working methods, gained considerable popularity in this period and received serious investments. It is an important discussion topic to what extent the infrastructures of Ethereum competitors can compete with Ethereum. However, it is of great importance that Ethereum does not lose its share in the market until the main update, called ETH 2.0, is expected to make the Ethereum network unrivaled. Therefore, many developers, especially Vitalik Buterin, one of the founders of Ethereum, are working on temporary solutions that can make the network more effective and cheaper until ETH 2.0 is finalized. Following the Berlin update, implemented for such purpose, the Ethereum network is now waiting for the London update. In this article, you can find notes on the changes in the London update as well as the purpose and motivation of such changes.

It may be necessary to give a brief description before going into the details. Proposals for changes to the Ethereum network are called EIP . The London update includes 5 EIPs, that is, 5 separate amendments. Although these items are discussed one by one below, EIP-1559 is the development that arouses the most interest due to its content related to the process of transactions on Ethereum and directly to the income of miners.

The fee to be paid for each transaction on the Ethereum network is paid in Gas unit. Gas is linked to the price of ETH, and as the price of ETH increases, so does Gas. Therefore, an increase in the ETH price causes an increase in Gas fees and hence higher fee rates to be paid for each transaction. Gas fees paid go directly into miners’ wallets. In short, miners earn income from both block rewards and Gas fees paid for transactions. The chart below shows the share of block rewards and Gas fees in miners’ revenue. Parallel to the rise in the ETH price, the share of fee income, shown in pink, started to become dominant. 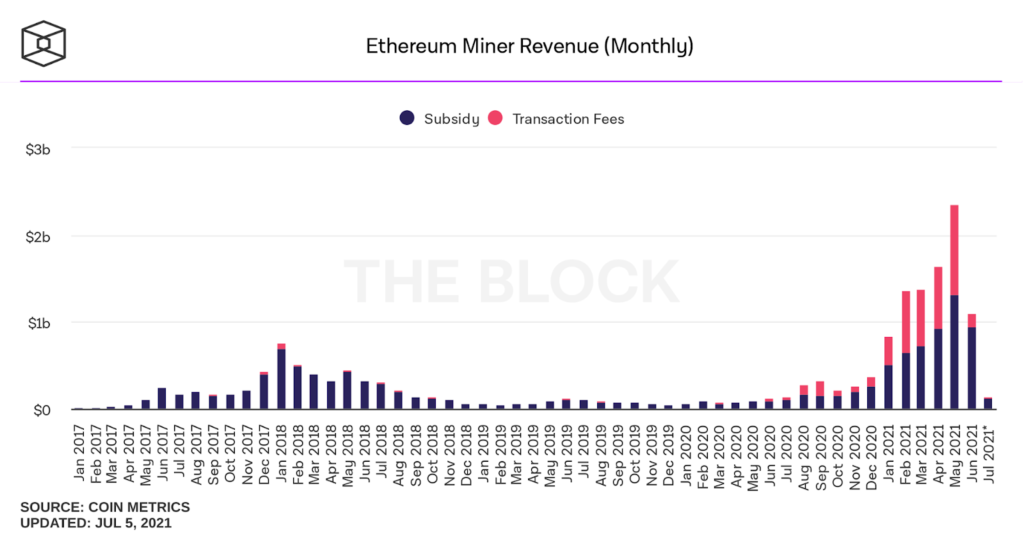 To prevent this, EIP-1559 divides the gas fee to be paid for transactions into 2 separate categories as base fee and tip. The base fee represents the minimum fee rate each user has to pay, whereas the tip, similar to the current system, is the amount of extra fee paid by users who want their transactions to be given priority. However, it is not expected that the other users will face long waiting times due to users paying high tips as in the current system. This is because EIP-1559 also enables double the block sizes in the Ethereum network. Doubling the block size means confirming twice as many transactions as normal, however, the system works a little differently.

Although EIP-1559 doubles the block sizes, the average occupancy rate of the block is targeted to be around 50%. Because confirming transactions 2 times more may decrease the effectiveness of the network as it will increase the data size. As a result, when the occupancy rate in the block reaches 50% during peak periods, the base fee will gradually increase and an extra fee will be required for the load created by the extra transactions. Therefore, transactions within the block may cause the block to be filled by more than 50%, resulting in an increase in the fee rate to be paid. In periods of low network density, a very low tip payment by users will ensure that the user’s transaction is added to the next block. While only the tip portion of the commission income, divided into two as the base fee and the tip, is transferred to the wallets of the miners, the income from the base fee will be burned. In this way, it is expected that the rate of increase in ETH supply will decrease and thus the price of ETH will increase in the long run. It is expected that the ETH supply will have a deflationary structure, that is, the amount of ETH in circulation will decrease instead of increase if the density in the Ethereum network is high. In this case, it is possible for the ETH price to rise even more aggressively.

In conclusion, with the coming of EIP-1559 development, miners will be deprived of a substantial fee income. However, their revenue from block rewards and tips may be appreciated in the long run as the price of ETH rises, closing this gap. Apart from revenue, the long waiting times and expensiveness in the Ethereum network have been attempted to be solved through increasing the block sizes by paying an extra-base fee during peak periods and confirming more transactions. In order not to increase the load on the network, it is aimed to have an average occupancy rate of 50% of the block size. Following this development, users will be able to determine the maximum fee (base fee + tip) they want to pay.

The main motivation for the creation of the EIP-1559 development was undoubtedly the reduction of waiting times and the cheapening of the network. Especially in the DeFi field, the fast execution of transactions is quite critical. Therefore, it is expected that the sector will become more effective with the decrease in the high fee rates paid for DeFi transactions. Apart from the above-mentioned factors, EIP-1559 aims to ensure that the majority of miners’ income is based on block rewards again. Because the high income from Gas fees causes the network to become vulnerable to manipulative attacks by malicious miners over Gas fees.

EIP-3198, serving as a sort of complement to the EIP-1559 development, involves integrating the ‘BASEFEE’ code into the Ethereum network. Developers will be able to reliably obtain the base price data in the block through this code. In this way, the base fee method, being a new system, can be integrated into smart contracts, allowing the prevention of malicious attacks that can be carried out over this data.

The difficulty bomb, which makes it mandatory for miners to leave the existing Ethereum network and integrate into the new network once the main development ETH 2.0 update is finalized, is postponed to December 2021 with EIP-3554. The difficulty bomb makes it nearly impossible to confirm blocks on the existing Ethereum network, preventing new transactions from being processed and miners generating revenue.

The difficulty bomb was also postponed in previous updates. However, the postponement periods generally covered a long period of time. The EIP-3554 development, on the other hand, foresees a relatively shorter delay and brings an update for the difficulty bomb to be carried out in December. The shortening of the delay means that the completion of the ETH 2.0 development is near.

Code software that starts as ‘0xEF’ will not be able to be integrated into the Ethereum network once this development is on the market. Codes already written in this way will be able to continue their activities. Thanks to the prevention of new software starting with this code, the increase in the number of contracts involving the format called EVM Object Format is prevented. There are unconfirmed versions of these contracts on the Ethereum network. It was decided to prevent the proliferation of such contracts in this format in order to clean up unconfirmed contracts and prevent the search area from growing. It is stated that contracts in this format can be easily reactivated with a new EIP in the future.

There exists an incentive system called ‘Good State Hygiene’, which envisages the refund of the Gas fees they spent to the developers in order to encourage more effective and cleaner work of application developers on Ethereum. By clearing unused storage and contracts on the network, developers qualify for Gas fee refunds from a type of Gas storage called ‘state slots’ where Gas fees accumulate. However, this practice causes developers to make manipulative moves over Gas refunds instead of helping the network work more effectively. It has been determined that the developers won’t initiate the refund processes when the gas fees are low, and they tend to receive the refunds when the Gas fees are high. This has negatively affected effectiveness by occasionally restricting access to GasToken on the network. A second negative effect of the gas refund process is that the Gas refunds cause the Gas fee to be used by the blocks to increase up to 2 times due to the space they occupy in the block. With the coming of EIP-3529, the space occupied by the Gas refund processes in the block will be reduced and the effectiveness of the network will be increased. Since the incentive mechanism causes more harm than good, the development of the EIP-3529 ensures that the Gas refund process is completely removed for the ‘SELFDESTRUCT’ command, and the refund rates are reduced for the ‘SSTORE’ command. In this way, the refunded Gas fees will still remain at a satisfactory level, while the profitability rate of manipulative movements to be made on Gas fees will decrease.

The Ethereum London update went live on the Ropsten testnet networks on June 24, Goerli on June 30, and Rinkeby on July 7. The update is expected to be integrated into the main Ethereum network on August 4.