IMF Goes to ‘Then They Fight You’ Phase 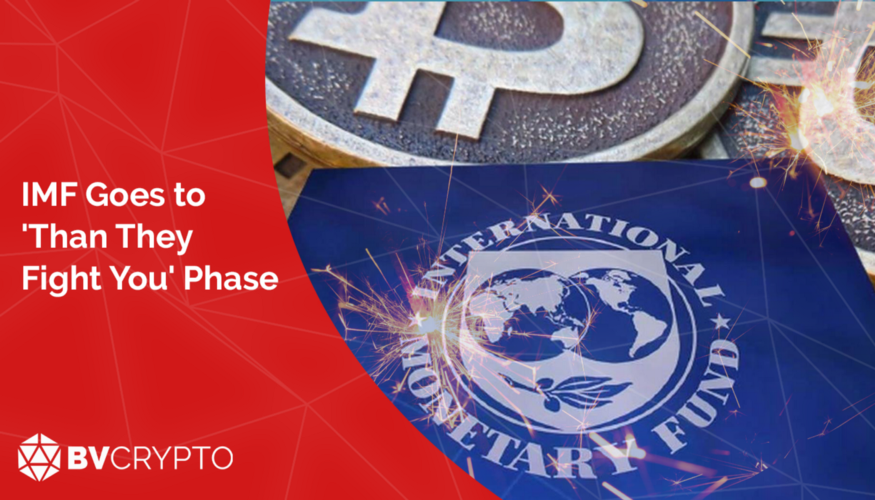 Ever since the beginning of the war in Ukraine, there have been signs of significant changes on a global scale. We have addressed these changes in recent weeks with two articles focusing on both economic and political change. Following the $45 billion agreement signed between the IMF and Argentina on March 17th, a new one has been added to the previous signals of change. What makes the IMF’s agreement with Argentina different from dozens of previous agreements is that the IMF put an additional clause in the agreement regarding cryptocurrencies. Behind the addition of this clause, there are statements from various countries regarding cryptocurrencies and digitalization, in addition to Argentina-specific reasons. In this article, we will examine the IMF’s decision from a broader perspective, looking at developments both in Argentina and globally.

The IMF, of which 190 countries are members, can be seen as a kind of emergency button on a door that countries knock on to get out of large-scale crises or to avoid the crisis. It is aimed not to disrupt the global debt cycle and not to cause a regional/global crisis with large loans given to the countries. In return for its loans, the IMF requests the country receiving aid follow a strict economic policy. These policies aim to reduce non-urgent expenditures as much as possible and make revenues efficient, but such corporate-like policies do not have very positive consequences for the public when applied to countries where millions of people live. In such cases, we often see that the work of the state in the social sphere is interrupted. Therefore, although the IMF is a full emergency button, no country wants to resort to the IMF easily.

Argentina, which has a chronic inflation problem, contacted the IMF as a last resort and received $45 billion worth of assistance, agreeing on policies set by the IMF. The agreement includes a clause that stipulates that Argentina should not encourage the use of cryptocurrency in the country. This article is of great importance to show that the IMF has taken cryptocurrencies as a threat. Since El Salvador made Bitcoin the official currency, we have frequently encountered warnings in various IMF papers that this decision will lead to financial instability. The popular market view on the reason for the IMF’s negative position on this issue is El Salvador’s plan to raise the same amount of money as BTC-based bonds instead of taking out a loan from the IMF. Therefore, it has been seen that Bitcoin and Bitcoin-based products can be an alternative to the IMF, which is no one’s first choice due to its strict policy impositions. Such an alternative for governments undoubtedly seems more attractive than IMF policies, which would result in a loss of votes.

This spark, which began with El Salvador’s use of Bitcoin as an alternative to the IMF, began to move forward to show exactly why the IMF was worried. For example; the President of Honduras, which is a small country like El Salvador, Xiomara Castro made a statement saying that they will follow El Salvador on the way to escape dollar hegemony. 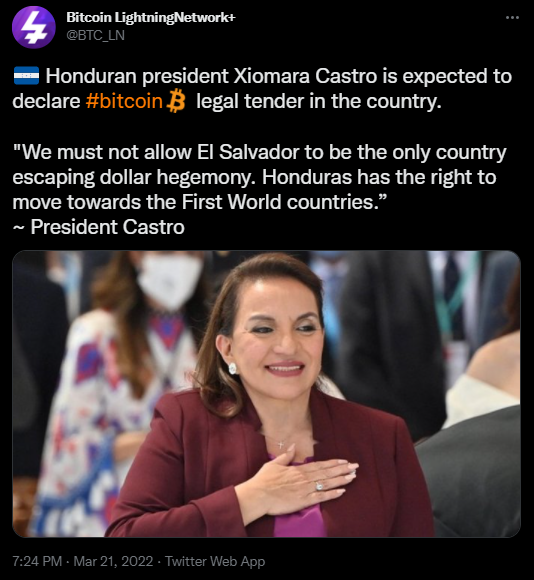 The economic size of the cryptocurrency market today is strong enough to meet the financing needs of Honduras and other countries close to the economic size of El Salvador. Therefore, it is possible for these countries to get help from players in the cryptocurrency market instead of the IMF. Although the economic size of these countries is not significant, they can have a chain effect. For such an effect to spread to larger economies such as Argentina, data accumulation is required. Since Bitcoin has a fixed monetary policy, it is theoretically possible to make predictions about how it will be used in the economy and how it can have effects, but it is not clear how it will work in practice due to various factors, especially price volatility.

For the first time in El Salvador, Bitcoin’s positive and negative effects on country-based policies began to be seen. In the following years, if the positive results of this data are seen to be high, countries such as Argentina are likely to participate in this trend. The cryptocurrency clause put in place by the IMF in its agreement with Argentina indicates that from this point of view, the IMF’s concerns have increased and it has started to take measures.

The inflation problem, which is common in South American countries, has made it a kind of reflex for the public to turn to inflation-resistant assets. Cryptocurrencies are also preferred because they provide high returns when viewed in the long term. As can be seen from the chart below, which is from a study conducted in January 2021, when the number of internet users between the ages of 16–64 who own cryptocurrencies is compared according to the population of the country, Argentina ranks 5th after Turkey with 16.4% in the ranking. 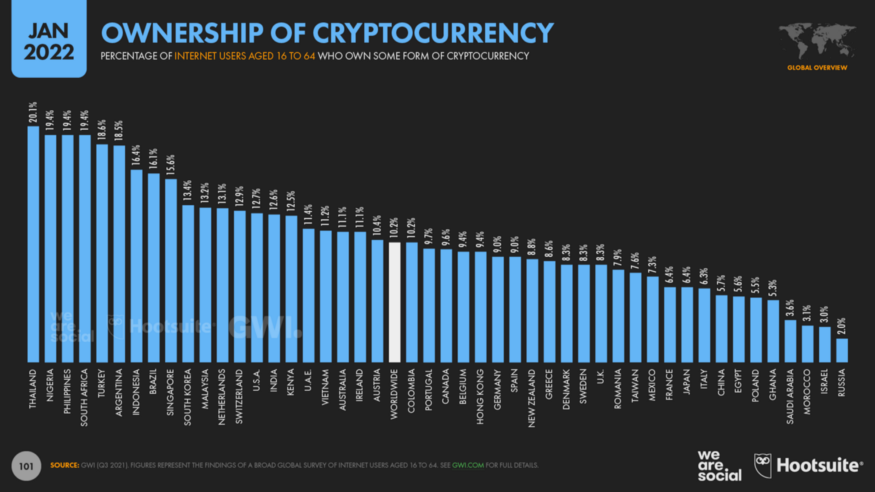 Interest in cryptocurrencies in Argentina is not limited to public cryptocurrency investment. Mercado Libre, Latin America’s largest e-commerce company, which received $8.6 million worth of BTC to protect against inflation, is an important example of companies also demanding cryptocurrency.

On the other hand, Cryptocurrency miners have recently started to invest in Argentina, as high inflation in Argentina has made the country’s electricity prices quite attractive in USD terms. Argentina is also drawing attention by its electricity supply and trained humanpower, which is even more economical than Kazakhstan, a country preferred because it provides cheap electricity. The following list shows the USD price that businesses in various countries pay per kilowatt. 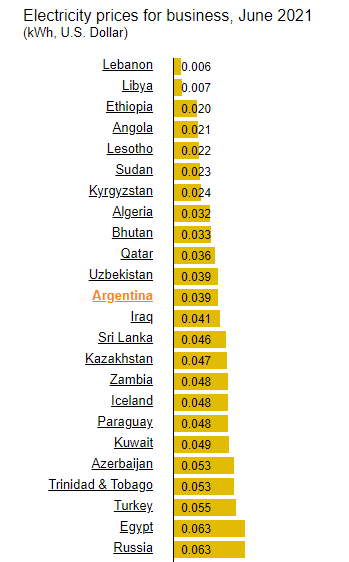 Although the transformation of cryptocurrencies in creating an alternative to the IMF is in the spark stage, the central banks of digital currencies (CBDC) which represent the transition to the digital economy have started to flare up bypassing the spark stage. In other words, it can be said that the discussion-trial phase has come to an end.

Singapore, Malaysia, South Africa, and Australia signed an agreement in September 2021 to test the international use of CBDCs through the prototype product. In a new statement, it was announced that the tests have ended and that the system will be available very soon. In the announcement, the gains can be collected in 3 main articles:

The most important conclusion from these articles is that countries will not have to use USD for transfers between themselves thanks to CBDCs, so the delays and costs imposed by SWIFT will not be sustained anymore. Although China has carried out the most advanced studies in the field of CBDC, the structure established by these four countries among themselves is very important in terms of showing CBDC’s international operability and creating an alternative to SWIFT.

When we adapt the words of Gandhi, India’s savior, “First they ignore you, then they laugh at you, then they fight you, and then you win” to cryptocurrencies, it can be said that after numerous Ponzi schemes and criticisms of fraud, the IMF’s Argentine agreement, which acts as a kind of protector of the current economic order , represents the transition from laughing at cryptocurrencies to fighting.

Politically, cryptocurrencies, which are highly advantageous because they prevent the loss of votes brought by the IMF, are expected to spread rapidly to relatively small countries with the maturation of data from El Salvador. With the growth of the cryptocurrency market, relatively larger countries may start to see cryptocurrencies as alternatives. Therefore, we can see the aforementioned developments as the most concrete first steps of a transformation that will last for many years.