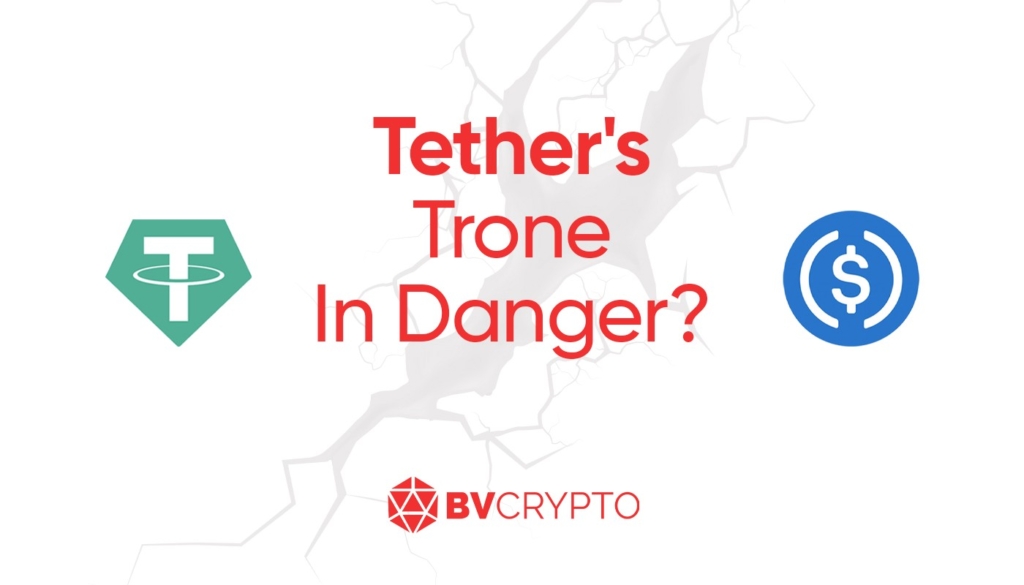 Is Tether’s Throne In Danger?

Stablecoins have undoubtedly been a milestone for the cryptocurrency industry. USDT has been, uncontrovertibly, the dominant stablecoin in the market for a long time. It still maintains this dominant position quite strongly. However, other stablecoins besides USDT try to get a share from the stablecoin market with their highly competitive structures. Three stablecoins have come to the fore recently in terms of competitiveness. These are USDC, BUSD, and DAI stablecoins.

BUSD, in addition to being a stablecoin linked to the Binance exchange, has popularity quite parallel to the usage rate of the Binance Smart Chain (BSC) network. DAI, on the other hand, represents loans taken in exchange of collateral of various altcoins accepted by the MakerDAO protocol, mainly ETH. In other words, MakerDAO provides loans with its altcoin-backed stablecoin, DAI, instead of USD-based stablecoins. However, both BUSD and DAI do not yet offer service comprehensively as USDT and they do not have enough demand.

USDC, offered by the Circle company, is the most prominent stablecoin in terms of competition with USDT. Recently, USDC has been growing quite rapidly, which is clearly seen in the charts. In this article, we will examine the causes and consequences of USDC’s growing dominance by directly increasing its market share against USDT, with charts showing the trend transformations in the field of stablecoin. 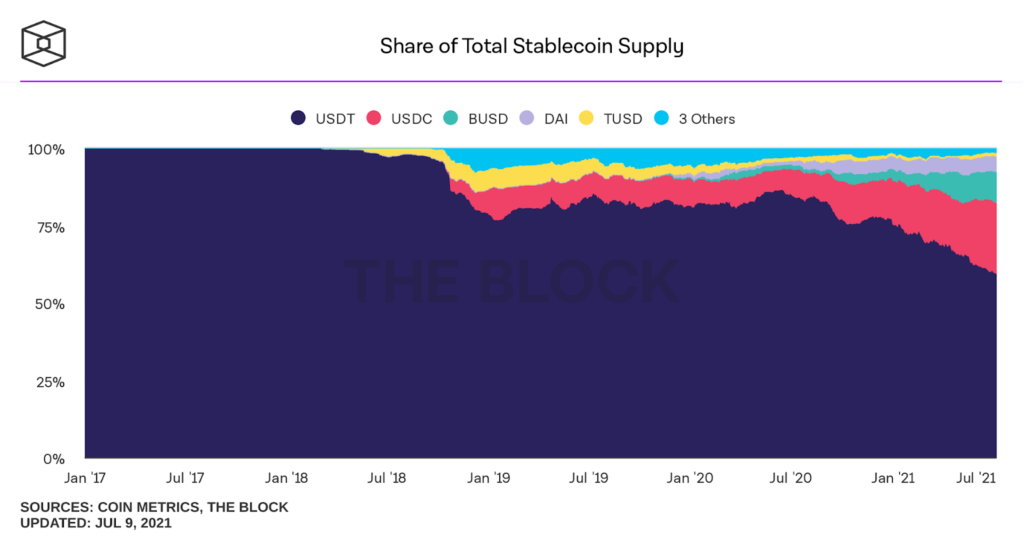 The chart above shows the market shares of all popular stablecoins. The largest share, represented in dark blue, belongs to USDT, while the reddish colour just above it belongs to USDC. The chart clearly shows that USDC has had a growth trend since late 2020. The most important conclusion to be drawn from this chart is that the increasing market share of USDC does not result from the decrease in other stablecoins, but directly from the decrease of USDT’s market share. This is also supported numerically by the monthly stablecoin volumes chart below. 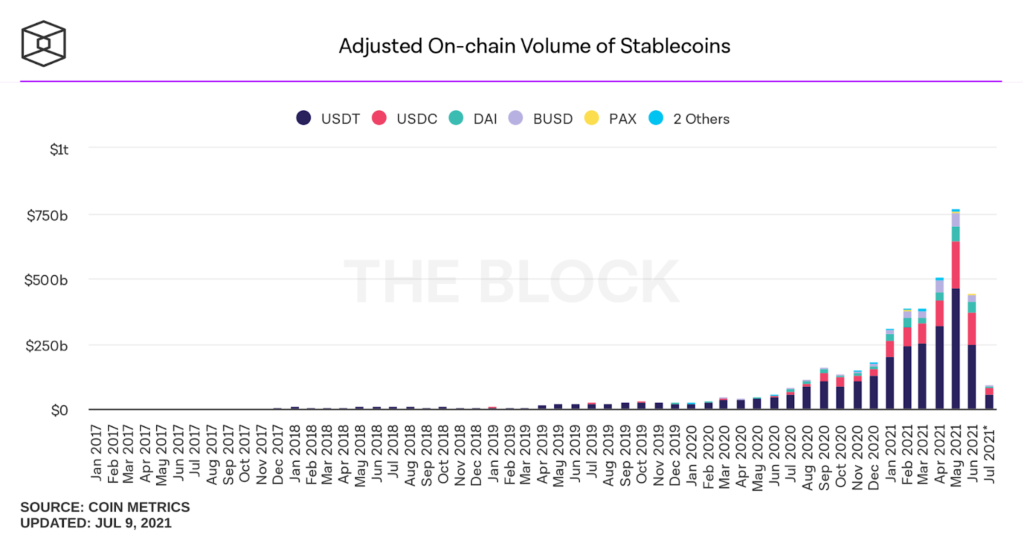 While the colours in the previous chart also apply to this chart, the share of each stablecoin in the monthly volume is also shown. Considering the data of the last 3 months, it is clearly seen that the trend change is in favour of USDC.

Considering the last 3-month period, USDC has continuously increased its market share both in May with very high trading volume and in June with very low trading volume due to the decline in the market. USDC, which has grown by almost 10% in 3 months, had a very aggressive increasing trend.

Looking at the battle for market share in more detail, we come across a classification of users according to the size of their wallet balance. These statistics show which type of investor is more likely to switch from USDT to USDC. 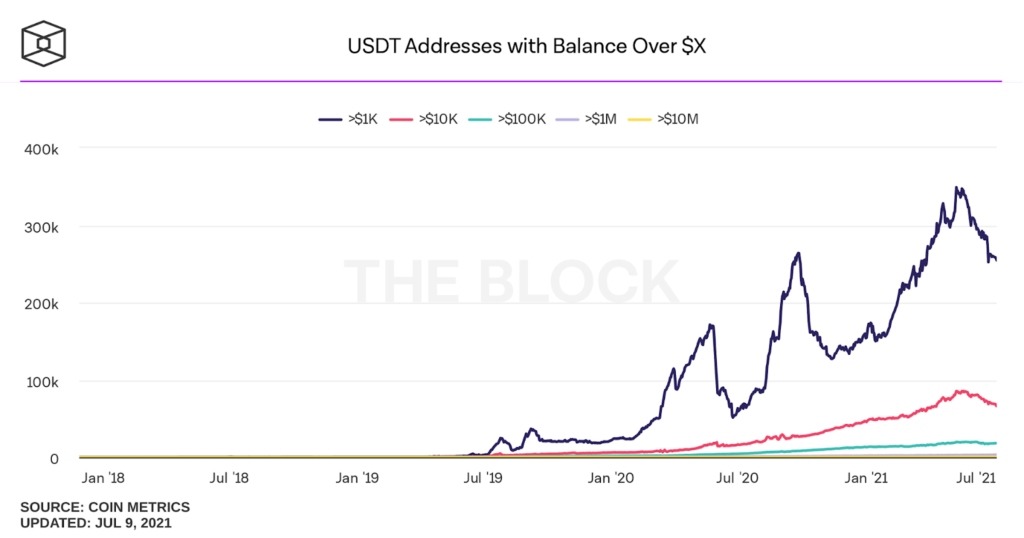 First, let’s take a look at which wallets are experiencing the highest decrease in demand based on USDT balance size. Wallets with a balance of 1,000–10,000 USDT seem to drastically stop holding USDT. This may be because small investors buy cryptocurrencies or exit the market directly. Although not with the same intensity, it is seen that there is a decrease in accounts with a balance of 10,000–100,000 USDT. 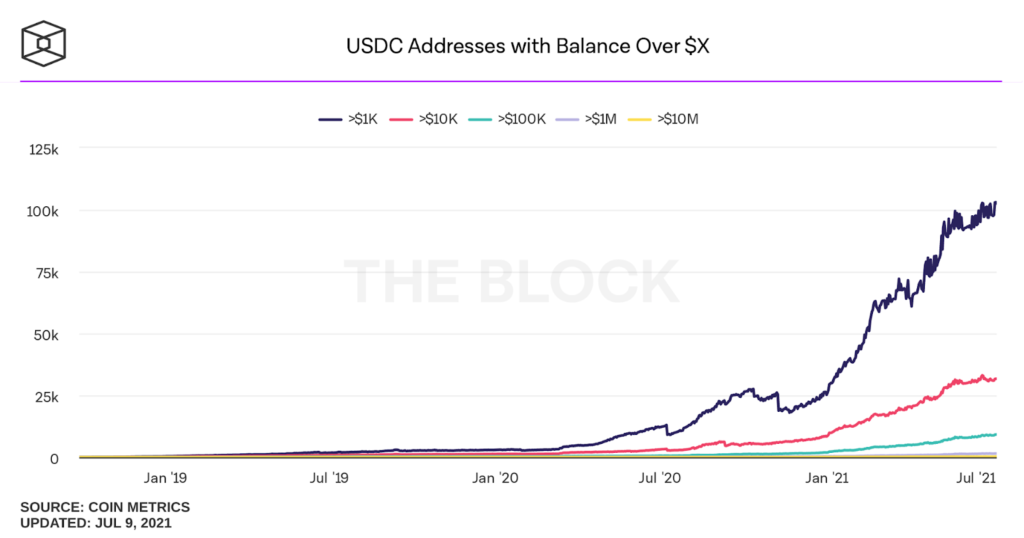 In the USDC version of the same chart, it is seen that there is an increase in investor types in all categories. In particular, the aggressive increase in the number of users who can be defined as small investors with a balance of 1,000–10,000 USDC indicates a clear shift from USDT to USDC for small investors. Although there is no significant increase in the number of users with larger balances, there is a limited increase or a horizontal course. This cannot be interpreted as those holding USDT bought cryptocurrencies, while those holding USDC did not. Because the demand in the market to buy or sell cryptocurrencies does not change for stablecoins. Such tendencies occur as a general trend. Therefore, it can be said that the trend transformation in favour of USDC starts directly from small investors, i.e. from the bottom of the pyramid.

There are many blockchain infrastructure platforms besides Ethereum. Most of these projects have their audience with varying degrees of popularity and different characteristics. Stablecoins aim to increase their volume by appealing to all kinds of investors in the cryptocurrency market and to benefit from the advantages offered by each network. USDT and USDC are currently the two stablecoins that offer the most diverse services among blockchain networks. It is noteworthy that USDT has acted more quickly in this area and has the majority of the market share in blockchain networks besides Ethereum. While USDC follows from behind in this area, it has now caught up with USDT in terms of diversity. 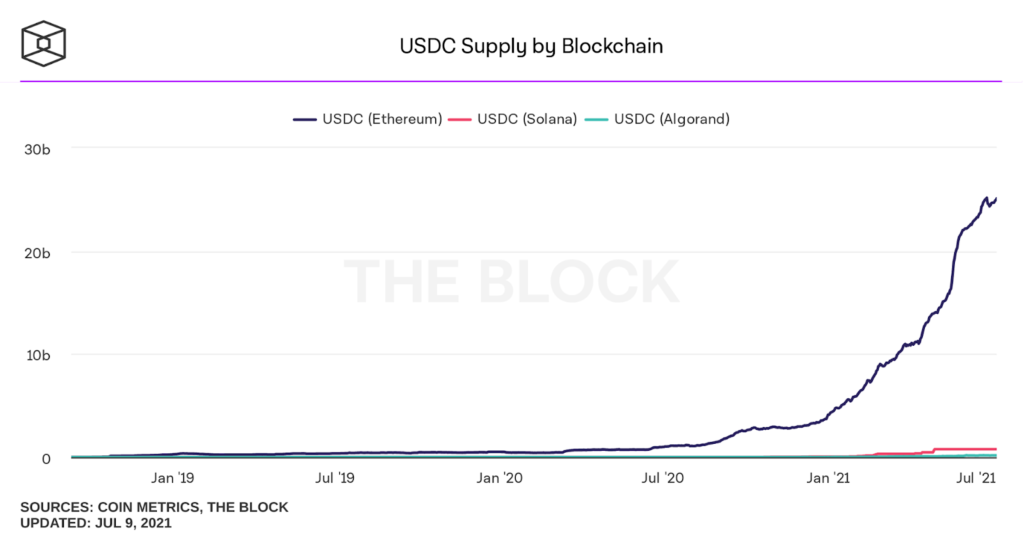 USDC operates almost entirely on the Ethereum network, as is seen in the chart. Although the chart shows the Algo and Solana networks, the Tron blockchain network has also been added to these networks. In USDT version of the same chart, it is seen that the Tron and Ethereum networks have a similar weight. The DeFi and NFT are mostly in the Ethereum network. However, since the Tron network has an important role as an ideal solution tool for affordable money transfer during periods of increased ETH price, USDT users should be divided into two based on the chart; those who only want to transfer money cause the density in the Tron network, while those who want to use platforms on Ethereum mostly for money transfer create the density on the Ethereum network. USDT has a clearly superior market share than USDC in this area. USDC needs to increase its competitiveness by gaining the current positive trend change in the Tron network as well.

It will be useful to look at the chart type called velocity for the circulation rate of stablecoins. The data in this chart is calculated as (daily volume of the stablecoin / circulating supply of the stablecoin). The high ratio indicates that the relevant stablecoin has a high transfer rate and demand. 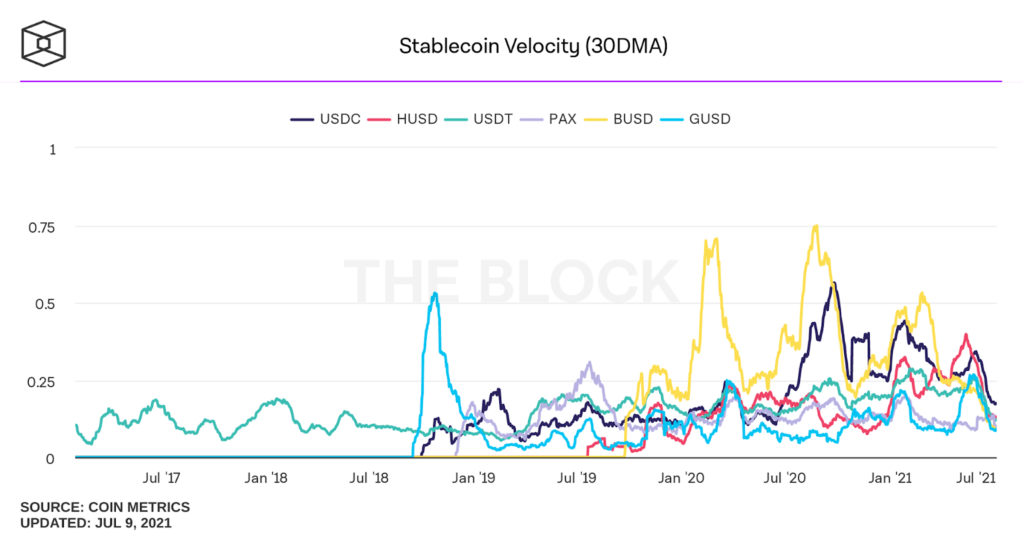 In the chart, light blue USDT, dark blue USDC, and yellow BUSD are the three stablecoins to take into account.

As mentioned at the beginning of the article, the increase in the usage of BUSD is highly dependent on the activities in the BSC network. This is the reason why BUSD in yellow on the Velocity chart does not have a regular trend, although it significantly rises from time to time.

From the far left to the far right of the chart, USDT always follows a stable course without rising above the level of 0,20–0,25.

USDC, on the other hand, has started to rise, especially since July 2020, by reaching the level of 0,5 and is trying to hold above the level of 0,25 since then.

In conclusion, it is important that USDC acts aggressively and reaches a higher transfer rate than USDT, even though there is no extra rise in the usage of USDT and it is following a stable course. This increase in usage rate results from the fact that USDT is no longer able to create a new story, which means that it does not turn to a process that will cause excitement in the market and create extra demand, whereas USDC creates more exciting and sustainable new stories with new integration attempts and financial developments. Some of these “stories” are listed below:

The two examples above show quite strikingly the steps taken with confidence in this currency due to the transparent nature of USDC. The basis for transparency is provided by the monthly balance sheet reports, audited by an independent accounting firm, to ensure that USDC tokens are USD-backed. While Visa and Sygnum are examples in this regard, similarly many institutional investors tend to choose USDC over USDT due to the transparency of USDC. Corporate companies aim to minimize their risk preferences in the cryptocurrency sector, which has very high price volatility and has its own internal dynamics, as they are in the market with relatively large amounts of capital. At this point, it is not surprising that USDC plays the leading role among stablecoins to be used as the main medium of exchange.

It should be noted that Tether has been accused of market manipulation and fraud since 2019, and this lawsuit was settled by settlement in February. Tether was accused of not having enough USD reserves in exchange for the USDTs it released. The important point here is that Tether was not found not innocent as a result of the lawsuit. Since the settlement made Tether pay a penalty of 18,5 million USD, it can be said that the accusations were right to a certain extent. After the settlement of the case, Tether shared a balance sheet of its holdings for USDT, revealing to hold only 3% of the cash and predominantly cash-equivalent derivatives. On July 1, Randal K. Quarles, one of the vice presidents of the FED, gave a speech implicitly criticizing Tether’s balance sheet. Due to Tether’s seemingly unsound balance sheet, it can be assumed that financial authorities have similar views. Hence, the sustainability of Tether’s current strategy is also a matter of clear debate.

(To read the article on Tether’s case click here)

Previously, the public offering of the Coinbase Exchange both increased the prestige of the company and created an important breaking point in the perception of corporate investors on cryptocurrency companies, with the announcement that the exchange had high profitability rates. A similar situation can be expected to have very positive effects for Circle. In addition, it is known that corporate investors invest in companies in the cryptocurrency market instead of directly in cryptocurrencies since ETF/ETP type derivative products have not yet been approved in the USA. For example, buying a share in a cryptocurrency mining company that produces mining equipment rather than buying cryptocurrency reflects a similar perspective. Hence, the fact that Circle company will go public in the USA after Coinbase will also pave the way for traditional investors to invest in companies operating in different fields within the cryptocurrency industry. The fact that USDC’s aggressive growth period in the market coincides with Circle’s decision to go public is a very logical move given the advantages above. USDC’s current increase trend may become even more aggressive as a result of developments such as public offering and interest income.

It is not possible to predict where the shares of USDT and USDC will end in the future. However, the fact that the competition in the market is as high as possible will result in the favour of users in the cryptocurrency industry, as in every market. Therefore, it will not be quite positive for the healthy growth of the industry to experience a similar high dominance over USDC, which USDT has currently. As long as USDT’s market share continues to decline, Tether may have to change its current strategy and adopt a more transparent structure. It is very critical that stablecoins raise the standards in the industry as a result of the competition among themselves, that they do not lose their share to the CBDCs that we will begin to see in the market in a few years, and that they continue to serve as a global exchange tool.