In this context, the differences between countries don’t emerge because of voters’ demands, but because of ignorance or false predictions by politicians. In other words, the prohibitive policies that are implemented in some countries are not due to a lack of demand or interest in cryptocurrencies by the public; these policies are put into practice because the politicians try to protect the traditional market or are unwilling to learn about the crypto market. Another key reason for making anti-crypto decisions may be that cryptocurrencies are not among the priorities of the people, because young voters who are familiar with cryptocurrencies are not in the majority. Still, the common opinion in the market is that younger people get to vote in each election, becoming more dominant in future elections and having a greater influence on politicians’ decisions. The most concrete example in this regard recently took place in the South Korean elections.

In this article, we will examine the cryptocurrency policies of Yoon Seok-yeol, who has won the South Korean elections, and some data on the subject.

The new president of South Korea, Yoon Suk-yeol won the election by a very small margin: just 1%. The election was a head-to-head race at first; the campaign managers wanted to get the votes of undecided young voters, so they put cryptocurrency at the center of their campaign promises. They used the following 4 NFTs as Yoon Suk-yeol’s donation and propaganda tools. With this, these NFTs now have some historical significance.

It is no surprise that the two candidates with the highest votes both had cryptocurrency-friendly policies. The strict regulations against cryptocurrencies implemented by Moon Jae-in, the former president, prevented the development of the domestic market and raised some eyebrows among the public. The biggest obstacles for the former president can be grouped under 3 categories:

The tax regulation envisioned 20% taxes on individuals earning $2,000 or more in cryptocurrencies. However, the regulation had to be delayed multiple times due to a lack of infrastructure and bad reactions from the public.

The new president promised to raise this lower limit of $2,000 to $40,000. If this regulation is implemented, the income tax will be due for wealthy people and not for those with relatively lower incomes.

During the former president’s term, the regulations on the cryptocurrency exchanges made it obligatory to register with the Korean Financial Intelligence Unit (FIU), to cooperate with the banks, and to obtain a certificate from the Korea Internet & Security Agency (KISA). Because of this, over 60 exchanges had to be closed and only 4 major exchanges could continue their activities.

The new president made no specific promise for exchanges, although during his term there may be new regulations to make things easier for the cryptocurrency market.

Until 4–5 years ago, cryptocurrency companies used the initial coin offerings (ICO) system quite extensively for fundraising; however, this system was banned in many countries, including South Korea, after frequent attempts at fraud. Since then, safer methods emerged, like the initial exchange offering (IEO), which involves financing through token sales on exchanges. Still, the strict policies were still in effect in South Korea, which was a major obstacle for the ecosystem to develop.

One of the promises of the new president was the integration of ICO-style financing systems with banks, ensuring secure regulation. Compared to the other regulations, it seems normal for the former president to put a ban on ICO, because of increased fraud. That said, his failure to adopt alternative methods defined the campaign promises of new presidential candidates.

South Korea has a population of 51.7 million and it is estimated that nearly 8.4 million South Koreans (16% of the population) own cryptocurrencies. 60% of these people are believed to be in their 20s or 30s. 8.4 million voters might sound like a high share of vote, but they do not represent the majority. Still, the fact that the two top candidates both made cryptocurrency friendly promises indicates that this was the “winning policy.” This concept refers to the polarization created by a pragmatic approach. Polarization exists everywhere, even in cryptocurrency, which shows that one part of South Korean society supports cryptocurrency, while the other does not. In this case, we can expect presidential candidates to adopt one of two pragmatic approaches, either crypto-friendly or anti-crypto. However, seeing both candidates follow friendly policies proves that the crypto-friendly approach is more profitable, as anti-crypto policies bring no benefit to the candidates. Given that more young voters will be voting in the next election, it is quite possible for future candidates to also follow a friendly policy.

As we see in the South Korea example, a dilemma began to emerge for politicians, where it became increasingly necessary for them to make a choice. One side means to take an anti crypto position, focusing on the traditional economic lobby; the other side means to look for ways to integrate cryptocurrencies into the existing system. We can predict that the cryptocurrency market is quite weak in lobbying activities. Albeit, some 2021 statistics offer strong proof for politicians to turn their backs on the lobbying support, shifting towards younger voters and this new economy. Let us now look at 2 key statistics about cryptocurrencies in 2021. 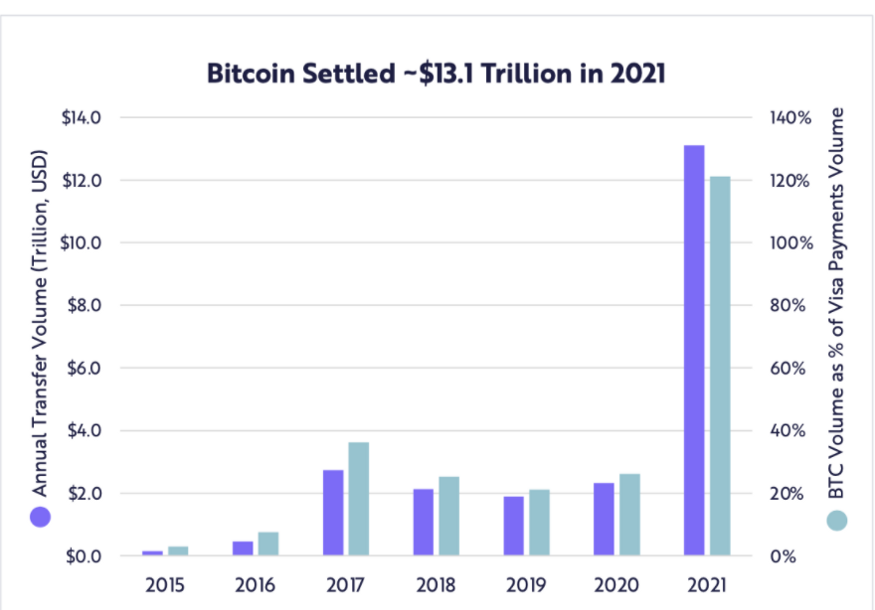 The total transfers made on the Bitcoin network in 2021 reached 13.1 trillion USD, surpassing Visa’s transfer volume of the same year for the first time. One year prior, the Bitcoin network marked a total transaction volume of about 2.5 trillion USD, which was 25% of what Visa made that year. Also, note that the chart does not include other cryptocurrencies. This extreme growth, in just one year, is crucial for showing the market’s potential.

Besides, the revenues of cryptocurrency markets in 2021 managed to surpass the revenues of some other giants, like the New York Stock Exchange (NYSE), Nasdaq, ICE, and Deutsche Boerse.

Given that the promises made by the South Korean politicians for the youth were centered around cryptocurrency and considering the two statistics above, we can expect politicians to eventually make decisions in favor of cryptocurrencies.

Conclusion: Unstoppable Supply and the Intersection

Today, there are two main supply flows that the financial world offers to us, the consumers. One part is the traditional world of finances and the second is the innovative finances, which includes cryptocurrencies. On the other hand, consumer demands are rapidly shifting from traditional finances to innovative finances, as seen in the graphs above. Hence, we may expect anti-crypto policy-makers to try to protect the current balances by cutting the supply, in other words, by banning or blocking the sector and supporting traditional finances through lobbying activities. However, the decentralized nature of Bitcoin and the aggressive growth of the industry make it impossible to ban. Because the crypto market is basically unstoppable. Another blocking way would be suppressing voters’ demands however it is politically very costly which would only cause lose more votes. In other words, given the unstoppable supply, the costs of making anti-crypto policies are much higher than the benefits to be made from crypto-friendly policies. For the field of politics, where pragmatism is at its highest level, we can easily guess that no one will want to bear the costs when they can reap the benefits. Thus, when it comes to making choices about cryptocurrency, politicians are basically forced to take a positive approach.

In conclusion, we have two intersection points. First one is the economic gains are moving to cryptocurrencies from traditional markets which we saw in the above charts and second one is that cryptocurrency friendly politics are starting to provide higher political benefits than crypto banning politics. So far, the recent election in South Korea has been the most concrete example of this transformation.