Social and Economic Effects of Games on the Cryptocurrency Market 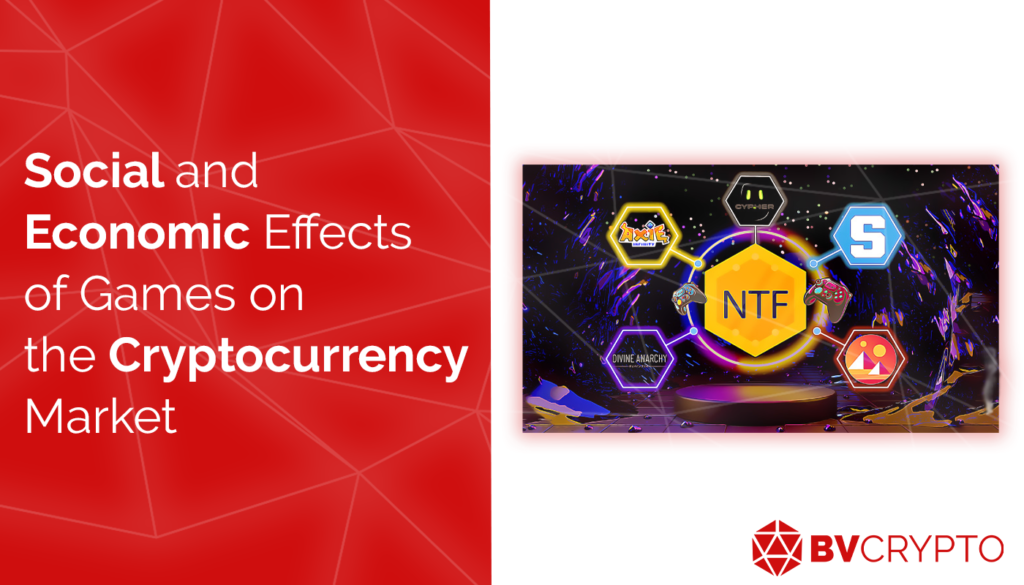 The cryptocurrency market was on its way to developing basic banking services on decentralized platforms before NFTs became popular. The path taken for financial freedom, together with the NFTs, allowed cryptocurrencies to touch the art and gaming sectors in particular. These two sectors, which have attracted the most attention and seen the most initiatives in the NFT market, have made an important contribution to the introduction of cryptocurrencies into our lives outside of banking services. While the art world is rapidly progressing, thanks to the rapid adaptation of world-renowned auction houses to NFTs and artist interest, the gaming industry will take time to develop the infrastructure it requires. Despite the fact that the trade volume is increasing day by day as a result of the NFT market’s initiatives, it is difficult to conclude that cryptocurrencies have a developed gaming sector yet. The scaling difficulty of blockchain networks due to the trilemma around decentralization, scalability, and security, which has been tried to be solved for a long time, may be shown at the beginning of the causes underlying this. In this article, we will focus on how “Play-to-Earn” games, which first appeared on the market last year, triggered blockchain networks to their boundaries and the social impact they had on players.

It is an issue that everyone is curious about when exactly cryptocurrencies will be used actively in daily life by replacing fiat currencies. Although payment systems have begun to develop in this field, it is still not possible to declare that cryptocurrencies have completely replaced fiat currencies. This is due to the fact that cryptocurrencies are considered an investment tool, rather than a currency that will be spent daily. For instance, let’s take a person using a credit card from a cryptocurrency exchange. Due to high volatility in cryptocurrency prices, it is not very appealing for this person to keep his/her money on the exchange. On the other hand, storing it as stable money does not offer a very different solution from the bank due to its centralized structure. Moreover, since the exchanges are centralized, they do not have much superiority over the banks in this area. As a result, although it makes sense to invest in cryptocurrencies, it is not yet very advantageous to use them in everyday life.

On the other hand, games with NFT content have the potential to make the profile of cryptocurrencies not just an investment tool, but a social tool that is in demand on a daily basis. Apart from the exchanges, NFT markets, or DeFi platforms, where financial transactions and investments are managed, NFT-based games have begun to be actively played to relieve stress and spend time with a group of friends, and it is considered a candidate to reveal the most significant social development process of cryptocurrencies.

Gaming organizations in the cryptocurrency market existed before NFTs became popular. Crypto Kitties was a popular game on the Ethereum network that might be considered one of the early pioneers of this trend. However, the fact that the game has become popular has not had many positive consequences for the Ethereum network. As players sent transaction requests to the network frequently, the gas paid to miners gradually increased, causing the network to become expensive and inefficient. This problem, which first appeared in 2017, unfortunately, is still present today. In the first week of January, a game called Sunflower caused a significant increase in gas costs, generating considerable congestion on the Polygon network, which is known for being inexpensive, fast, and reliable.

The most essential point to note here is that both the Ethereum network in 2017 and the Polygon network now are experiencing such an increase in gas, despite the fact that only one game is popular. Considering that a new gaming project with NFTs is announced almost every day, it’s possible that blockchain networks may grow more and more expensive as more games become popular.

For the reasons stated above, game projects develop their own networks or use alternative networks such as Avalanche and Solana. For example, Axie Infinity, which marked the past year, operates on its own network, Ronin. In brief, blockchain networks’ existing capacities are unable to support many popular games like Axie Infinity. Therefore, it can be said that we are approaching the natural limits of blockchain networks, with games being the latest trend in the cryptocurrency market. As a solution, cross-chain and multi-chain platforms, allow game tokens to reach mainstream networks such as Ethereum. It is possible for the gaming industry to achieve a fully developed ecosystem and move the cryptocurrency market to the next level with the maturation of existing scalability studies.

The basic game principle of games with NFT content is expressed as “Play-to-Earn”. Existing gaming projects might be viewed as significant steps in this direction for many people who wish to make money through playing games. However, it appears that players in the current gaming industry, which is not based on this system, are less enthused about the inclusion of cryptocurrencies and NFTs in games. This is because users can access existing games only for entertainment purposes for free or for a one-time purchase however it is anticipated that ‘Play-to-earn’ games will create an economy that needs recurring cost for players. Furthermore, the expectation that the games will be used not just by players, but also by users who want to take advantage of or manipulate income as a result of the game’s earning opportunity, creates a negative view.

When we consider the problems with regard to Axie Infinity, we can see that the cost of 3 Axie to play the game is thousands of dollars when the game is at its most popular. The fact that the initial cost of entering the game is so high makes it difficult for new players to enter the game and causes the games to move away from the entertainment factor, which is the most basic function of the games. Therefore, in games on the play-to-earn principle, the fact that the cost of entry into the game is low, as well as the appreciation of NFT products, actually solves the problem to a large extent. As a matter of fact, Axie Infinity recently announced that it is working on making the game free to start. Axie Infinity is the industry leader due to its popularity. Therefore, in order for newly launched game projects to compete with Axie, it is imperative that they reduce their entry costs. As a result, it is seen that NFT-based games are on the threshold of a new era in which the concerns of the players in the field of the cost will be eliminated. Since the in-game costs are also present in the current game market, it is not expected to draw a reaction from the players.

One of the most common criticisms leveled at games that use the play-to-earn concept is that it is a pyramid system that will collapse when new player entry stops. With the popularity of the game, the increase in demand for game NFTs naturally increases the price. Therefore, improvements such as providing entry to the game with minimum cost and mechanisms that encourage the player to progress in the game are extremely important in terms of eliminating pyramid criticism.

The cost of entry is not the only reason for the view that demand will not be sustainable. Normally, since the demand in the game industry increases every year, there are no serious concerns about the decrease in demand in the industry. However, the source of concern that the demand generated by players in play-to-earn games may decrease is due to the fact that large companies in the industry are not in a hurry to invest in NFT-based games.

At the beginning of the article, we mentioned that NFTs in the art sector are brought together with traditional buyers by world-renowned auction houses. The rapid adoption of the auction houses quickly passed the part of the public debate about whether it makes sense for artworks to be in NFT format. Art NFTs were quickly adopted, thanks to the prestige of the auction houses and the subjectivity of the art. On the subject of gaming NFTs, the leading companies of the industry avoided making quick decisions. The reason for this can be summarized as the fact that the game has much more complicated processes and components compared to art. Today, although leading companies such as Ubisoft and EA have various studies on games with NFT content, the development and adoption process of the game takes time. Therefore, time is needed for NFTs for play-to-earn games to interact with traditional buyers, that is to say, players who are not interested in cryptocurrency, as in works of art.

With the problems related to the continuity of demand seen in the pyramid criticism, the reduction of entry costs and the conclusion of the current work of the leading companies of the sector in the coming months, and the emergence of many successful games such as Axie Infinity, the adaptation of players to play-to-earn based games will increase rapidly and existing concerns will be resolved. Making these actions will ensure that the rise of NFT-based games in the cryptocurrency market is not restricted to the last year, but will continue aggressively in the years ahead.

There is no doubt that the gaming business, which generates around 220 billion USD yearly, has an abundance of people and capital to propel the cryptocurrency market forward. The lack of scalability in blockchain networks indicates that the crypto market is not yet ready for a fully developed gaming ecosystem. Despite this, the dynamic structure of the game market and the high number of new projects show that the investment appetite in the market is high. Based on this, it should come as no surprise that many successful game projects such as Axie Infinity will come to life in the coming months and years. The fact that many games can run smoothly in decentralized networks with the density of existing platforms allows the crypto money market to gain a much wider and more comprehensive profile, leaving behind the perception of being a market used only for investment and money transfer. It can be said that the gaming industry, which gained momentum with the NFT trend, represents the future of the cryptocurrency market.